All you have to do is take 15 seconds scrolling down the trending hashtag for #InstagramStories to see what the masses think about it – not so good!

Instagram Stories is a “brand new” feature (to Instagram at least) which allows the user to post an image/video or stream of images/videos which only lasts 24 hours. Said images can have filters added and be comically edited, allowing the user to be arty and inspired. 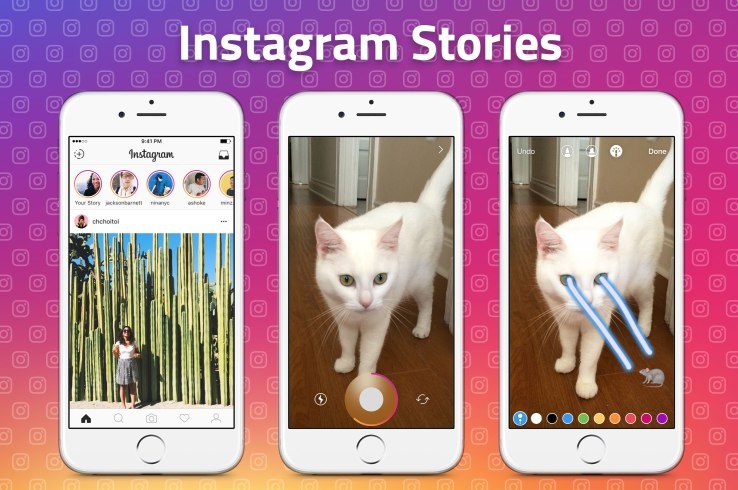 The idea is that it will help to capture real life in the moment, rather than historic posts – giving the followers of an individual access to the then and now. A great idea, if only they hadn’t stolen it from their rivals over at Snapchat HQ. Amazingly, Instagram agrees!

In an interview with Instagram’s CEO, Kevin Systrom he admitted the new feature was based on what Snapchat had rolled out back in 2014. When discussing Instagram Stories, Systrom said, “every company looks around and adopts the best of the best formats or state-of-the-art technology”. He also said Snapchat, “deserve all the credit”. Does this mean we should just turn a blind eye to the clear mimicking?

He followed up by suggesting almost no popular Digital feature is original anymore, with the ‘feed’, ‘hashtag’, ‘@’ or even the ‘iPhone’ not being the first of their kind, someone else introduced them before they become popular. Most Social Networks now use a feed or the hashtag system, and the most popular smartphone in the world is the iPhone – but it was definitely not the first mobile.

As much as we might growl & grumble over the loss of innovation or creativity, you can see his point. If an idea works and makes the user’s experience more rich and fulfilled, then surely incorporating this into the Social Network is a good thing, both for the user and for the company.

However, one only has to begin using the new feature and a couple of issues are already noticeable.

Unlike Snapchat which tends to be a more friend-to-friend user experience, a user of Instagram follows considerably more accounts, of friends, acquaintances, celebrities, businesses, popular figures etc. etc. This number could easily be in the thousands.

Now let’s consider that within a 24-hour period, each of those post 2 images to their story. That’s well over a couple of thousand photos and videos you are obliged to watch in just one day. Who has the time?!

Not only that but how do you filter through them all to find the ones you actually want to watch? Currently (and admittedly it is very early stages for the feature) there is no way to quickly search through your list of ‘Following’ for the story you most want to watch.

Perhaps then a clear divide should be made between Snapchat and Instagram. Snapchat is for friends; Instagram is for celebrity / business?

We have previously spoken about how Instagram could be used for marketing, but Instagram Stories throws us into a whole new park of multi-coloured balls.

More businesses are present on Instagram than on Snapchat; posting images of their products or services, and of ‘behind the scenes’. Even here at clockworkTalent, we use it to make us seem more human, showing our followers what we get up to when we’re not helping job seekers find their dream careers.

For Instagram Stories, it could be used to promote a particular “product of the day”, or to briefly document an event or conference. It could be a great way to point the attention at something in particular – using the creative nature of the filters and editing to make it stand out even more so. It also reduces the need for brands to clog up the news feeds of their followers – the user has to want to connect to the brand’s message.

Thus there is a larger degree of power placed in the hands of the audience as they have the choice, as well as there being another avenue for a business to conduct its marketing. Win Win? Perhaps it is too early to say how this will develop, but it’s worth keeping an eye on!

So what next for Snapchat? Their USP is slowly being disintegrated by their competitors. All the Social Networks are becoming more and more alike as the months’ pass by. Perhaps what is needed is another ground-breaking feature, one which will make one social media stand out amongst the rest.

For now, we millions (even billions in Facebook’s case) of users have to succumb to the whim of the conglomerates – accepting the changes and using them in the best way that we can, from both a personal or business perspective.